The Grant Family At Deer Hollow

Deer Hollow Farm is one of the last working homestead farms in California. In the mid-1800s, most Americans lived on a homestead farm. That meant that they lived in a rural area, raising animals and plants for their food, and perhaps bartered with neighbors. Deer Hollow Farm is rich in history, a place where we can walk into the past and experience what life was like. Today we spend only a small part of our day acquiring our food, but on a homestead farm, most of the day was spent growing, preserving, and preparing it.

The original Grant Homestead was located near the current Deer Hollow Farmer’s home. This photo likely shows Frank Grant and his wife Margaret standing to the left and brother George with the horse on the right. The Grant homestead included a small orchard and a large garden, thought to be located on the site of today’s Ohlone Village. The couple planted a Monterey Pine near their home. Today, near the bridge to the current farm house, one can see offspring of that pine

The Grant family, who owned Deer Hollow Farm and about 360 surrounding acres, was not typical of 19th century homestead farmers. The Grants ran several businesses on their land and were, therefore, wealthier than the average American homesteader. They could afford to hire help such as a foreman, who lived in the foreman’s cabin, the oldest structure at Deer Hollow Farm.

The Grant family owned the property for 77 years, selling it in 1937 to George Perham, who ran a construction company on the land. Midpeninsula Regional Open Space District (MROSD) acquired the property in 1975.
In 1992, the structural integrity of the Grant cabin was restored under a joint project by MROSD and the City of Mountain View.
In 1996, the cabin’s interior was fully restored and furnished with artifacts. These projects were made possible through the contributions of the Santa Clara County Board of Supervisors and the Santa Clara County Historical Heritage Commission with help from many volunteers.

In the mid-1800s when the Grant family lived at Deer Hollow, farmers made up about 70% of America’s labor force. The homestead farm gradually died out as the cities grew. By the 1920s, farmers were less than one third of the labor force.
Theodore Franklin Grant, Sr. (known as Frank) and his wife Margaret, lived on what is now the site of Deer Hollow Farm and Rancho San Antonio Open Space Preserve for 77 years.

The Grant Brothers, Frank and George, settled what is now Deer Hollow Farm in 1853. Frank Grant was born in Boston on January 22, 1827. Frank worked in a lamp store in Maine for three years, but when he heard news of the Gold Rush, he closed up shop and sailed for San Francisco on the schooner Ortolan.

Frank chose not to mine the gold, but to provide services to the influx of people to San Francisco during the Gold Rush. Landing in San Francisco in 1850, he worked as a store clerk and then in San Francisco’s first hotel, The Montgomery House. One of his duties was to guard the sacks of gold dust brought in by miners.

In 1851 Frank walked from San Francisco to Santa Clara to work as a clerk and later as Postmaster and Treasurer of the city until 1858. He then moved to San Jose where he served as its Treasurer and Deputy Recorder.
Meanwhile, Frank’s brother George had also followed the news of the Gold Rush, taking an arduous journey to San Francisco. In 1851, he sailed from New York to Chagres, a port on the Atlantic side of the Isthmus of Panama. He crossed the Isthmus on mules and then paddled the Chagres River in a canoe to a port on the west side of the Isthmus, where he took a steamer to San Francisco.

Once there, George worked for the George Shaw & Co store in San Francisco, then entered the grocery business with S.C. Bradshaw. Later, George bought 200 acres of land at Point Reyes, in Marin County, investing in a small fishing shack. He loaded a boat with a year’s worth of provisions and set sail. Unfortunately, a heavy storm destroyed the boat and all his supplies in Drake’s Bay.

Together Frank and George tried the drayage business. They unloaded ships at the San Francisco docks, delivering the goods around the area. It was a prosperous business until disaster struck. One night as the tide went out, their boat, filled with supplies, drifted under the wharfs. When the tide rose, the ship was caught under the wharf and submerged, thus ending this business venture.

Camping Out On Their Land

Undaunted, in 1853 the brothers purchased their first parcel of land, 160 acres in Fremont Township at the end of the road which today bears their name. Today, the land is part of Rancho San Antonio Preserve. They frequently camped out on the land under the oaks. According to his son Theodore Franklin Jr., “They always kept their matches in a little can along with a supply of coffee. Dad remarked that if a man could get a good, hot cup of coffee that was all he should ask.”

Together the Grant brothers acquired another parcel of California school lands, and purchased 110 acres of the San Antonio Rancho from Charles R. Storey, an early-day Santa Clara County politician. All three tracts adjoined, making the Grant Ranch about 360 acres.

The former New England city dwellers worked the ranch together, living the homestead life of hard work and challenges. At the time, many grizzly bears and mountain lions lived near their ranch, sometimes making travel dangerous. Ox carts were the mode of transportation from their ranch to Santa Clara, the nearest trading town.

In 1865, Frank met Margaret Shaw, who was working on the neighboring 1,200 acre Snyder Ranch (later St. Joseph’s Seminary). According to a May 16, 1924 Mountain View Register Leader article, they married in 1865 and the young wife took charge of the Grant Brothers’ bachelor home. George never married, living with the Grants until his death in 1898 in what was then known as “Sleepy Hollow”.

Frank and Margaret lived there until their deaths in 1924. Their children, Isabel, Theodore Jr., and Sarah, were born and raised in their home. Isabel, an artist, died in 1884 of scarlet fever. Sarah, also known as “Sally,” planted most of the non-native plants and trees along the road to Deer Hollow Farm. Sarah never married and lived at the old farm house until 1937 when she moved to Santa Cruz.

The Grant Ranch first produced firewood for the Southern Pacific Railroad. They cleared the timber and smaller brush from 150 acres of the ranch, hauling it by ox cart to a railroad frontage road in Mountain View, where long stacks of cord wood were piled for the engineers to take on as needed. Grant was paid for his wood in silver dollars, since in those years, there were few banks, no paper money in circulation, and very little gold.

With the fields cleared, the Grants went into the ranching business. At the time the area only had a Spanish breed of cattle, which were small and wiry with long horns. Frank bought his cattle for $80-$100 a head for a beautiful herd of about 100 head of cattle. The following year, 1864, was a very dry year. The cattle could not find enough water, and all through the Valley, cattle died.

After Ranching Came The Dairy Business 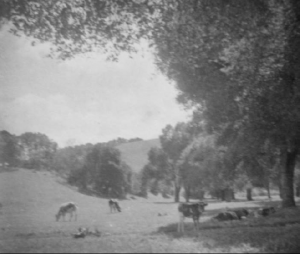 Their next venture was into the dairy business. Frank’s son, Theodore F. Grant, Jr., reminisced in a 1937 letter that his father fed the 30 cows, and Uncle George milked them, because “after watching father milking, Uncle George declared that father would stop the cows from giving any milk at all.”

After 1873, the Grants turned to their final business: cultivating wheat and hay.

Frank was the proud owner of one of the first Edison gramophones in Santa Clara Valley around 1900. His son said people came from all around to hear it. His father placed the long speaker so that it stuck out of a window while the record player portion was still inside. Frank insisted guests sit outside while listening. If anyone dared speak or laugh during the music, the sometimes short-tempered Frank would turn off the record, sending everyone home.

Frank Jr. was born on January 1, 1869 in the Grant home. He lived until 1958 and had four children with his wife Isabel, who died in 1963: Louis, Isabel, Mary and Virginia. Frank Jr. was in real estate and also managed the St. Joseph’s Seminary for several years.
In 1905 he built a home on a hill overlooking the meadow on the way to Deer Hollow Farm. 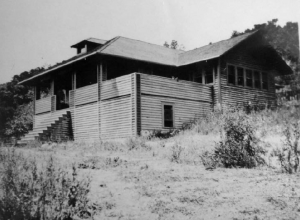 Frank Jr.’s Home, which is no longer standing. An old driveway and bridge are visible leading across the creek to the home site. Amaryllis (Pink Ladies) and other non-native plants mark the spot.

Many of the current Deer Hollow buildings date from the original ranch. There were two barns at the same location of the present ones, which were later rebuilt.

The original Grant homestead was located near the current location of Deer Hollow Farmer’s home. It was destroyed around 1950.

Photos of the farm today:

The Apple Shed (now the Nature Center) The holes at the base of the walls were for tossing bad apples down a chute to land outside.

To prepare the Grant story, Friends of Deer Hollow Farm used these sources. We welcome your comments and additions. Send them to info@deerhollowfarmfriends.org.

Unpublished notes from interviews with Louis Grant and Virginia Grant Murphy at Deer Hollow Farm, May 1995.

Signup for our Newsletter!